Was reading Malcolm Gladwell’s take on Chris Anderson’s “Free: The Future of a Radical Price,” and was struck by two things:

1.) The price you pay for free content isn’t money, it’s time. There’s a reason I don’t download every free App on the iPhone App Store – it’s because most of it is garbage. Where the future is going to come from re: free content is in ranking and filtering systems that people trust. Otherwise ALL free content is going to be filtered out as garbage, because no one can sort the wheat from the chaff.

2.) Anderson’s charging $26.99 for his book? Fuck that. For someone who’s advocating the bullshit that “information wants to be free,” he’s charging a hell of a fucking lot more than free.

Took Mobius to the beach today – made him chase after sticks in the surf ’till he was worn out. Good times! I took him in this:

…which is our new car! Got it for a couple hundred bucks below invoice, which was nice. So far, it’s a blast. Quieter and more powerful than the Civic, and roomier as well.

We’re selling the Civic to a friend, so it won’t stray too far from the family. 🙂 I spent the morning vacuuming it out, and pulled out enough hair to make a small dog.

Gotta wash it and get it smogged, but that’ll probably have to wait ’till later, when it’s a bit less hot.

Work’s going well – we’re closing in on the end of our next game, and the update for Taxiball’s sitting at Apple, waiting to be approved. Still having a blast, and the new game’s surprisingly addictive. It’s weird – it’s one of those simple ideas that I’m really surprised hasn’t been done and done to death already, but I expect once we launch, it’ll be a few weeks ’till the App Store is flooded with clones. We’ll see. I think we’ve got such a high-quality product – both functional and beautiful – that we’ll be able to beat back any competitors. Should be a good time. 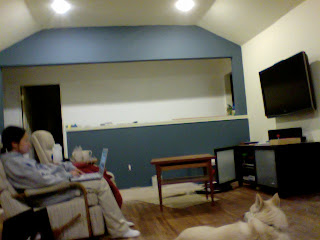 Been a while since I’ve written anything. Since you can’t RSS this blog, I’m sure no one’ll see this for weeks. Ha.

So. If you haven’t already heard, we’re having a kid. Specifically, if everything continues to chug along as it has, we’ll be having a son in October. No, we don’t yet know the name. Stop asking. 🙂

Ei-Nyung’s younger (I’d originally written little, but he’s not that little anymore) brother is coming out to visit for about a month starting Saturday. Starting *Wednesday*, we’ll be getting the floors refinished. It’s all pretty crazy. We’ve been painting the new drywall for the last five or six days – I’m just about as sick of painting as a single person can be, and more, both hands are totally cramped from the pressure required to get a thin coat of paint out of the rollers. I picked up a Napa cabbage at the store this evening, and could barely hold on to it.

Tomorrow, we’ve gotta move the remaining stuff outta the living room so that the floors can be sanded. Should be fun.

It’s pretty crazy how different it all looks.

On the work side, Taxiball’s been out for a couple weeks now, and it’s chugging along. We got featured in the “New & Noteworthy” section of the Games page on the App Store, and while it’s been good at generating momentum, and the game continues to sell, it’s not taking off like a rocket. We’ve got lots of really, really positive reviews from review sites, but it’s not driving traffic to the game. Advertising on Penny Arcade’s really entertaining for me from a personal perspective, but hasn’t paid off in terms of a return on the investment.

The next few things we’ve got in the pipe are all really, really exciting – and given Taxiball’s positive response, I’m confident that the next games will be as good – it’s just a matter of getting them out to an audience. We’re gonna keep updating Taxiball with new content, and see how it does – we have some really oddball plans coming up, so who knows what will eventually make the game “tip.”

Anyway. Gotta get someone to look at the outside of the house – if we can get the water leak fixed before winter, then that’ll be all the major house issues, save the upstairs bathroom, complete. Who would have thought?