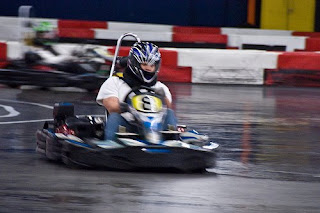 Things have been going really well so far with the whole new work arrangement. We’ve picked a name, and barring legal conflicts (which I don’t forsee), our new division is called SelfAware Games. The idea is to simply refer to it as SelfAware, in sort of the same way you never call Insomniac Insomniac Games. I’m down to basically 1.1 jobs from 3, and it’s made my life a hell of a lot easier.

Just turned 33, which is sort of odd. Not bad, or anything… just odd.

Been playing Halo Wars, Killzone 2, Resident Evil 5, and MadWorld. An interesting bunch of VERY high profile games released in an unusual timeframe. I can only hope that the major console developers have finally gotten off the “must release during holiday!” bus. It’s only taken four or five years of catastrophic clusterfuckedness… sheesh.

On a totally different note, went Karting for my birthday (thanks, Ei-Nyung) and had an absolute blast. Jess took some nice pictures, including the one above. I really, really enjoy go-karting. I suspect I’d enjoy a day at the track just as much, but the risk factor for karting is much lower, which is a pretty serious plus, particularly given that I have no training driving, which I’d definitely want before doing a track day.

Still – big fun, and I’m looking forward to going again sometime relatively soon. No videogame driving comes even marginally close to the experience. One of the funny things was that the night before we went (it was supposed to be a surprise), I’d watched “Truth in 24“, a documentary about Audi’s 2008 run at the 24 Hours of LeMans. The documentary was awesome, and it definitely made me want to go race. I’d even IM’ed a friend saying I was gonna organize a go-karting trip the following week. So the surprise was really, really well timed. 😀

Saw Watchmen the other day as well, and it was a really good interpretation of a story that I wouldn’t have thought possible to condense into a 2-ish hour movie. I have no idea how it’d translate to someone without having read the book, but as a companion to the original story, it’s actually pretty fantastic. Made me go re-read the book, and it’s a really good story. As a movie, though, Watchmen is worse than the story, just because of its density. V for Vendetta, on the other hand, was better as a movie than a comic, IMO – and remains my favorite Alan Moore movie. 😀 Still want to go see Watchmen again, though.

Other’n that, life continues to chug along. It’s been, and is going to be, a very, very interesting year.

Gotta work out plans for a trip to Chicago at the beginning of May.